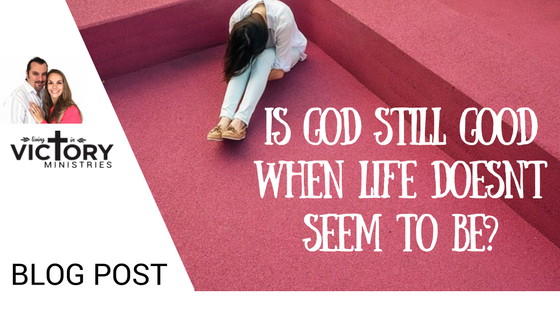 Recently I’ve seen the goodness of God even when life didn’t seem all that good.

A few months ago, I released a book called, Testimonies of a Good God. It’s my story of the goodness of God, His grace and  faithfulness in my life.

However in the midst of this, I have been going through one of the most challenging seasons physically that I have ever walked through.

In mid-December I hurt my back and was unable to work the rest of the month due to the pain I was in. Then en-route to a family holiday in Germany, I found myself lying in an intensive care unit of a non-English speaking hospital in Belgium. In front of me, the doctor telling me that I had a severe infection around the lining of my heart. I spent one night in the intensive care unit and a further three days in the hospital. Those three days were really intense and I was looking forward to going back to England and to doctors who spoke English. However the day before I were due to be released from hospital, we were told that I needed to stay local to the hospital for a further week, at a hotel.  I was then to return to the hospital for tests, to confirm if I was well enough to go back to England.

After a week I was given the all clear and told that we could go back home. We arrived home and I went to see my GP to get some clarity on what had actually happened to me. The GP was great, he explained the details of what was going on. Not speaking French or German, we had not understood a lot of what the doctors had said in Belgium. Our GP said he would like me to go for further tests just to make sure everything was okay. I agreed, and the tests were scheduled for the next week.

At this stage I still wasn’t well and was physically very weak. We prayed and trusted God for good report, but the tests didn’t go well and 10 days after arriving back in England, I was admitted to hospital. I was told that I still had the infection around the lining of my heart as well as another suspected infection of some sort. From the symptoms I was having the doctors were confident something else was wrong. I spent a week in the hospital in the cardiology ward. While I was there, an elderly gentleman passed away in the bed right opposite me. Needless to say this was not the most pleasant experience of my life, and at the time I was struggling to see the goodness of God in this situation.

After a week I was released from the hospital and sent home. Numerous tests had been done, all of which came back fine and I was clear to go home and rest for 6 weeks or so to recover.  I was told that perhaps my back injury from mid-December was causing the other symptoms in my body and I was referred to a physiotherapist.

I spent the next 6 weeks in bed hardly being able to do anything, only leaving the house once a week when my wife drove me to the physiotherapist. I discovered that the injury I had sustained in December was actually me tearing part of the Latissimus dorsi muscle off my rib cage, which is the reason I was in so much pain and experiencing the symptoms that had the doctors worried. My body was in so much pain that it was periodically causing me to shiver uncontrollably and my heart to race.

This trial has been going on for over four months now and since being released from the Hospital in England, I have had two further visits to the accident and emergency room, being in so much pain that my body was not able to cope with. This caused my heart to race and made it difficult for me to focus on what was going on around me.

Since January, there have been two occasions that I found myself lying on a hospital bed with three or four doctors standing over me, with me wondering if that was going to be the day I was going to meet Jesus face to face. The weird thing is, I always thought I was afraid of dying. It turns out I actually wasn’t, because during those two times, even though it was incredibly intense and somewhat scary, it was amazingly peaceful. What was I so afraid of? Yes I didn’t want to leave my wife and kids, but if I did, I would be in heaven with Jesus, which at the time seemed pretty good.

It’s been a couple of weeks now since my last visit to the hospital. Although I haven’t experienced the fullness of the healing we are trusting God for, I have seen radical improvement. I am almost back to normal with the exception of not being able to perform some physical tasks that I used to find pretty easy. I still haven’t been able to return to work yet, but we will get there. All the infections are gone and now it’s just a case of a making full recovery.

As I have pondered on the events of the last few months, the things I have realised are not what I thought God would reveal to me at all.

I still believe in the goodness of God and I will praise Him through any storm. This reality of God being God and being good is cemented in me and I refuse to allow any situation or circumstance to rob that from me. I realised something in me had changed, when I was in the hospital bed in Belgium. I physically was not strong enough to get out of the bed, yet I found myself praising God for my fingers and toes that still worked. I found myself being thankful for what God was doing and not ungrateful for what I thought He was not. This is a daily walk though, truthfully since then, there have been ups and downs. Some days I’m so thankful to God for His goodness, others a little irritated with life and the circumstances I’ve found myself in.

Well for me, everything has changed. For the last year and a half I have felt God speak to me to release my book to a bigger audience. I had wrestled with God over this, I was scared and didn’t want to do it. I have come to realise that I’m more afraid of meeting God one day, with me saying that I didn’t do what He asked because I was too scared, than of what people might think or say. So I have done it, the book is out for the world to see. So what if people don’t like it. So what if the devil doesn’t like it. So what, so what, SO WHAT!!!! I’ve come to place where I have run out of excuses. I want to live in the fullness of what God has for me and do what He has called me to do. I want to see people walk free into what God has for them too.

I’m a work in progress, but I have decided that for me and my family we will serve the Lord. We will do what He is asking us to do. We will do it bold, brave, or even scared, but we will do it! We still believe He is a good God. There are lots of things I don’t currently understand but I choose to believe God and His word. In the light of eternity, this will all make sense. Somehow God will bring all things together for my good. He will redeem all the things I currently don’t understand. We will see the goodness of God in this situation.

So I encourage you to trust God and do what He is asking you to do.

Lots of love and God bless you

If you would like to find out more about the book 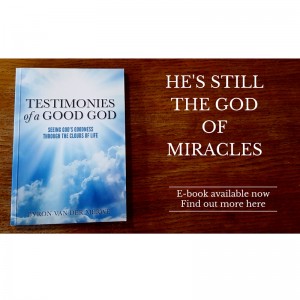 8 Comments on “IS GOD STILL GOOD WHEN LIFE DOESN’T SEEM TO BE?”